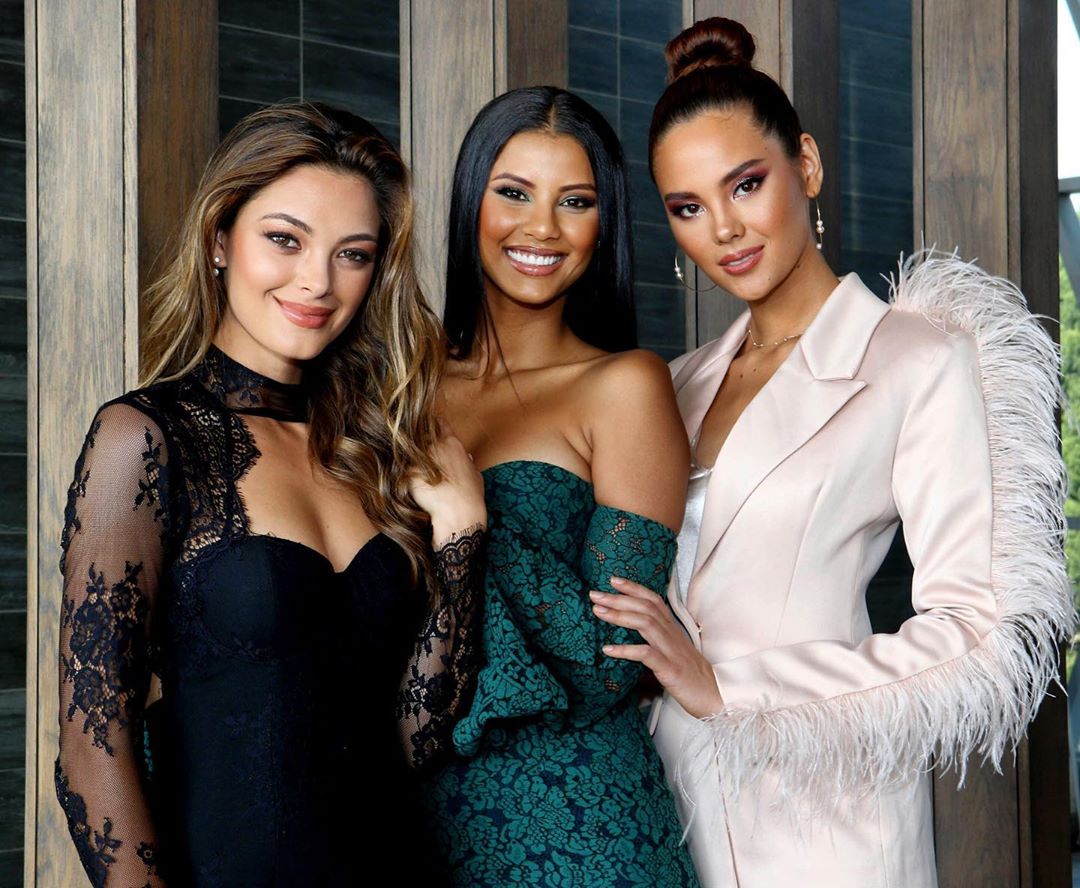 Catriona Gray and Tamaryn Green last saw each other in Thailand in 2018 when they vied for the Miss Universe title. Now nine months later they have reunited, causing a massive social media frenzy among their fans. Current reigning Miss South Africa Tamaryn Green, who came second to Miss Universe Catriona Gray at the 2018 edition of the pageant reunited at a press conference this morning ahead of this year’s Miss SA pageant.

Gray is in South Africa as a Miss SA 2019 judge where she will help decide who Green hands her crown over to on Friday. After the press conference, which was also attended by Miss Universe 2017 Demi-Leigh Nel-Peters, the beauty queens took to Instagram to express their excitement of finally seeing each other.

Gray posted a picture of herself alongside Green and Nel-Peters with the caption “Finally”. The picture has been liked 118 000 times and counting. Gray also posted a video on her Instagram Stories where she said: “So we just finished the press conference. We are reunited! It feels so surreal

to be reunited once again with Tam and of course with Demi. It’s an amazing trio to be a part of and it’s just one more day until Miss South Africa and I am excited to see who will continue the amazing legacy that these two women have left.

Speaking at the conference Green said of her time as Miss South Africa: “It was better than I could ever have imagined. When I took part in Miss Universe, I felt the whole country behind me.

“I am thrilled to be celebrating this diverse group of talented women on such an important day. This event gives us a platform to stand up and be heard. People realise we do have opinions and we are taken seriously.”

Both Green and Nel-Peters also took to their social media accounts to express their excitement about the reunion. Miss South Africa 2019 takes place on Friday, 9 August at Time Square in Pretoria and will be aired on Mzansi Magic (Dstv channel 161) and M-Net (Dstv channel 101) at 5pm.

Nomzamo Mbatha Threatens To Spill The Beans On Maps Maponyane

Somizi and Mohale are #Marriagegoals: Video

DJ and motivational speaker Dineo Ranaka has some words of wisdom to share about the importance of “isolating external influences” and...

While amapiano tracks are rocking dance floors across the country, DJ Bongz does not believe the gwara gwara is under threat....

Somizi and Mohale are #Marriagegoals: Video

Since officially tying the knot, Mzansi’s favourite couple Somizi and Mohale are ready to Step In The Name Of Love and are...

Ladysmith Black Mambazo has suspended its US tour due to the coronavirus outbreak. The five-time Grammy Award-winning group is still...

In the wake of news that Menzi Ngubane is leaving popular telenovela Isibaya, fans and fellow actors have flooded TLs...

The trend ‘men are trash’ has once again come to the spotlight after the alleged baby mama exposed the evil...

As you grow older, the number of wedding and baby shower invites increase at an alarming rate and it is usually for...

Any parent knows that when your kid wants something, there’s very little you can do to sway them. One dad...

Can we say this is Karma? because if it is, for sure it has struck. Just a few weeks ago...

Instead of just infecting people, the virus has gone an extra mile and has started affecting people’s finances. This is...