Zodwa Wabantu and her new bae.

When Zodwa Wabantu posted her photos on Instagram with her new ben 10, Vusi Buthelezi (23) many jumped to conclusions that he could be in the relationship for money, but it is purely out of real love, he told Move magazine.

“In fact, when I met her I had my own graphic business called We Solve. I am not depending on her money. In fact, from time to time I spoil her and she enjoys that.

“She makes her own money and I make mine, no one is feeling used. Although I believe I’m’ at an advantaged because she is wiser and guides me,” Vusi said.

Zodwa, born Libram, met her new bae at the Durban July and since then has been giving fans a glance into their love life. And people have since been making mixed sentiments, others asking what happened to her previous boyfriend.

In a flip flop of events, just few months ago, she was set to marry banker fiancé Ntobeko Linda, with rings bought, lobola paid and the dress fitted. However, it was over within flash of seconds.

Now Vusi is the man in Zodwa’s life, the 23-year-old is a student at Durban University of Technology and is from Richards Bay.

“We met at Butcher Boys in Florida Road, Durban. I don’t know where I got the courage but when I saw her, I just walked up to her and introduced myself.

“I had no intention of dating her. I just wanted to do business with her. I offered to brand her bus and she agreed. At that time, there was no spark at all and we were simply doing business,” he recalled.

He charged her about R10 000 for the job. “She was happy with the job and then she asked me to do a banner for her. After that she gave me more jobs. I guess we started warming up to each other. We’d check up on each other on a regular basis and we started going out together.

“Whenever I was free I’d visit her and she’d do the same. I guess we were missing each other and we were not even realising it. At that time, we didn’t even realise we were falling for each other,” he said.

After three months, Vusi noticed the chemistry between them. He followed his heart and went for it, asking her to be his girlfriend. 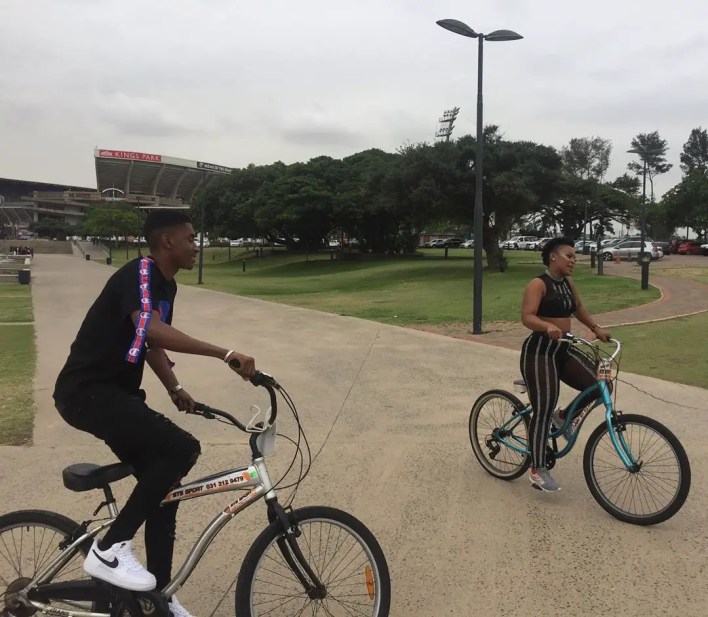 “I had a sense that she loved me too but she was too shy to tell me. I can still remember . . . it was in the evening and she’d come to see me. We were sitting in her car and I looked her deep in the eyes, she blushed and smiled. I then took her hand and told her I love her. Since then we’ve been inseparable. Everyday, we fall in love,” a smitten Vusi said.

Zodwa (34) is equally happy and proud of Vusi and is ready to show him off to the world. She wanted to meet at uShaka because the vibrancy complements her current mood.

Zodwa claimed she didn’t switch relationships from one to the next, but gave herself the time to heal before starting again.

She called off her wedding to Ntobeko before July, just weeks after they had publicly broken up and reconciled.

“When I met Vusi I had already healed so I’m definitely not on a rebound. He was single and I was single. It is important to note that I didn’t jump from one relationship to another but I waited, I mourned for Ntobeko because I loved him deeply,” she said.

She had been seeing Ntobeko for four years. “He was a part of me. I’d done things for him. I was on the verge of marrying him when I dumped him. He became too much for me.
“When I started dating him, he was not a celebrity but gradually he became one and I didn’t like that. I’ve always made it clear to him that I don’t like dating a celebrity because I am a celebrity.

“This is because the celebrity lifestyle is fake and I don’t want to date a fake person. When I come back home, I need a real boyfriend. I am glad Vusi understands this. He grounds me, brings me back to normal life and reminds me who Zodwa is,” she said.

LIVING IN THE PRESENT

She’s happy in her current relationship and can’t imagine what the future holds. “What I know is that I don’t want to get married. I think it’s not meant for me. But then again we don’t know where Mother Nature will lead us. For now our ambition is to nurture our love, build each other and see where love leads us.

“I also understand that he’s still young and he still has a long way to go. It is my responsibility to make sure he finishes his diploma. I’ve got to make sure he doesn’t make silly mistakes while I’m around but that doesn’t mean I’m his mother,” she said.

Vusi said they’ve been in it for few months but it feels like they’ve known each other for years.

“I am well aware that people are already judging me, calling me names. I’m not her Ben 10, I’m her boyfriend. They also think I’m dating her for benefits and her celebrity status. “not the case – I’m dating not Zodwa the yes, she is a bit older it’s not the first time I’m older woman. My ex-end was older than me. What important for me is that I her,” he explained.

He added that they are still in real business and that he makes sure Zodwa pays.
“Our principle is that we should always separate business and our relationship. Of course, there will be favours here and there,” he said.

He has already introduced Zodwa to her family. “I’ve introduced her to my family and those who are close to me and she has done the same.

“I’ve met her son and some of the people that are close to her. The reason I introduced her to my family is because I knew they’d find out and I didn’t want that to happen,” said Vusi, adding that for now they are taking each day as it comes.

“I cannot say if we’ll ever have a family or not. What we know is that we are happily in love. However, she has made it clear that she doesn’t want any more children and I respect that. It doesn’t necessarily mean I agree or disagree with her.
Whatever people believe, he’s sure their relationship will last.

“We have opposite personalities. She is outgoing, I’m not. She’s the people person, I’m an introvert, so she knows how to lighten me up. What people don’t know is that she is very sensitive, she’s a softie at heart and she cries a lot. She is street-wise and I’m more of an academic and business-minded person. We actually complement each other,” said Vusi.

Lady Zamar is so in love with Summer - Pictures