Veteran actress Thembi Mtshali-Jones on being honoured away from home and the pain of losing her husband “I miss him so much”.

The stage went alight, when singer and actress, Thembi Mtshali-Jones was being honoured, in a foreign land, making her a universal winner, sadly her mind was far in the distant, as she pondered about one person who wasn’t in the audience; her husband, Emrys Jones.

She felt a wave of sadness as she stepped onto the podium to receive the accolade.

Thembi (69) forced a smile as she accepted the living legend award at the National Black Theatre Festival in North Carolina in the US in August this year. In receiving the award she joined the team of global heavyweights Sidney Poitier, Denzel Washington and Oprah Winfrey.

Thembi spoke to DRUM magazine recently, and opened up how she felt. “It means a lot to me. I’ve been honoured at home but to get this recognition in America is proof I’m appreciated globally,” she said bravely, but failing to hide her grief.

The veteran stage and TV star, well known for starring as Thoko in ‘Sgudi’ Snaysi opposite Joe Mafela, and MaNdlovu in e.tv’s Imbewu: The Seed, desperately wished her husband Emrys was still alive to share the joy of her success.

“I miss him so much. Every part I had, he was there rehearsing the lines with me. He became a part of every character I portrayed,” she told the magazine.

Thembi and Emrys were together for 17 years until a heart attack stole him away from her three years ago. And for her, it is the suddenness of his departure to the next world that still hurts so much.

Recalling the events of that fateful day. She woke up as usual, went to the kitchen of their Cape Town home to make coffee, leaving Emrys still asleep in their bedroom.

“I heard a noise coming from the bedroom. I thought one of our paintings had fallen off the wall and hit the door,” she said.

Without delay, she ran back into the room and found her husband on the floor. “I pressed the panic button. Everything happened so fast,” she recalled.

Paramedics did not waste time as they arrived instantly, but Emrys was pronounced dead at the scene. Thembi felt her world curving in, around her in slow motion. “I was slowly drowning in pain. It felt like I was losing my mind,” she said.

Three painful months went until she headed for India to grieve alone and nurse the pain.

“I went to the mountains to meditate. I realised I’d been bottling things up and I needed to mourn and deal with my loss,” she said.

Her self imposed solitude indeed helped her. “I came back feeling better,” she explained.

Emrys and Thembi met through mutual friends when Emrys, who was from the UK then, and 10 years her junior, was in Mzansi on holiday. 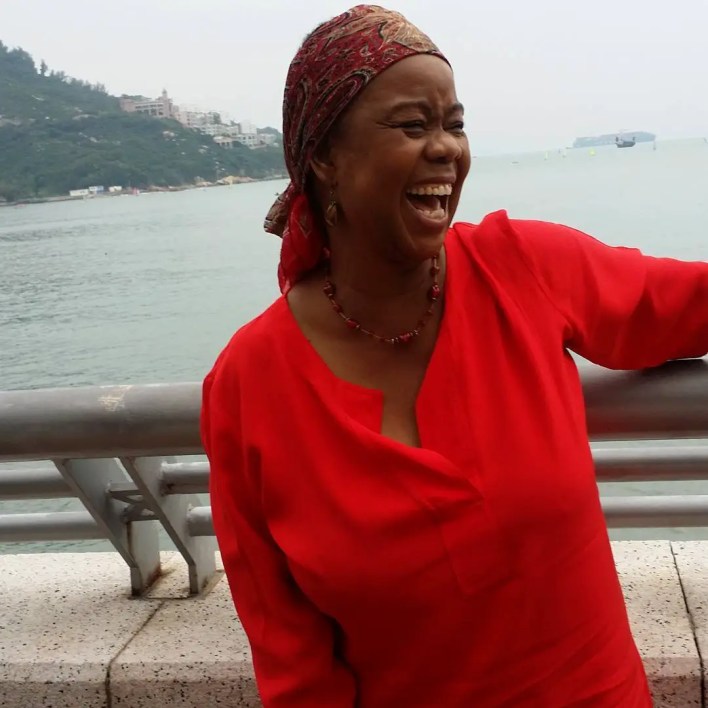 “He came with friends to watch my one-woman show, A Woman in Waiting, and afterwards we all went out for drinks. We exchanged numbers and started chatting,” she said.

Thembi, a business analyst for a London-based oil company, had no plans of settling down before she met Emrys.

“I came from a broken family. My parents were divorced and I didn’t have a beautiful picture of marriage. I didn’t want to get married,” she narrated.

She had a daughter, Phumzile, from a previous relationship from which marriage was not in the plans. But Emrys was Mr Right for her, he gave her both space and support far from the public eye.

“He would say he didn’t want to be famous,” she said. This year, the couple could have celebrated their 20th wedding anniversary.

“God decided to take him away but I’m grateful for having had that kind of love. Through him I got to know that true love does exist,” she added.

Three years after his death, the memory of that love still makes her tick and keeps her going. And being honoured as she recently was in America motivates her to continue contributing to the industry.

Thembi recently starred in the acclaimed production of Mother to Mother at the National Black Theatre Festival.

The play is based on Sindiwe Magona’s novel and looks into the story of the mother of one of the men who killed American student Amy Biehl in Gugulethu, Cape Town, in 1993 and her struggle to come to terms with her son’s deeds.

Theatre was Thembi’s debut love since she started performing in the ’70s and she has no plans of slowing down. “I’ll act until I can’t read the scripts anymore,” she said.

And she keeps reinventing herself too, so as to keep up with modern and new trends.

“I learn from the young actors. I do my research and change with the times,” she said.

As a performer, she has won many prizes at home. In 2009 she received the lifetime achievement award from the City of Durban and another from the Arts and Culture Trust in 2015. She was also honoured by the Naledi Theatre Awards in 2016. And more recently she was honoured in America.

Speaking about many of her plays, she addmitted that playing MaNdlovu in Imbewu had been a challenge.

“I’ve always played characters similar to my personality but this one is completely different,” she said.
MaNdlovu is over-controlling and protective of her sons, Shongololo (Sandile Dlamini) and Zimele (Tony Kgoroge).

“She has given me a platform to research and look around for people who have similar characteristics to her. MaNdlovu behaves like an unmarried aunt who’s too controlling and there are people like her in all our families,” she said.

Switching to real life, Thembi is totally divorced from her character. She’s a loving mother to Phumzile and a doting gogo to Khanyisile (25) and Luba (16).

“I allow my daughter to be her own person. My job as a mother is to support and advise her but I’m not overbearing. I do the same with my grandchildren, I don’t dictate to them,” she added.

Reflecting on ’Sgudi ’Snaysi, she explained that back then; “African stories were written by white people who didn’t understand us.

“With ’Sgudi ’Snaysi, the writer allowed [the actors] to make the jokes relevant to the African audience,” she said. The show was billed to be a single season of just 13 episodes, but it blew up and it touches her that she and Don Mlangeni Nawa, who played Laqhasha, are the only surviving members of the sitcom. “All the other cast members have passed away now. It would’ve been nice for them to be recognised while they were still alive, like I’ve been. “In the US they embrace older artists. They respect and appreciate them. They don’t take them for granted like we do in this country. South Africa can learn a lot from the US on how to treat performing legends,” she concluded.