Today, Osama hitmaker Zakes Bantwini is celebrating his 41st birthday and his wife Nandi Madida showered him with the sweetest words. In her lengthy post, Mrs. Madida reflected on when he wrote Osama and what the song means for them.

Zakes and Nandi have been married for almost 6 years now and together they have two kids, a 5-year-old son Shaka Madida and a daughter, 3-year-old Queen Nefertiti Madida.

To celebrate her husband’s birthday, Nandi took to Instagram and shared a lengthy post, where she speaks about his impact on her life.

“Where do I even begin? Happy birthday to a man who has really taught me what it means to be absolutely spiritually aligned with the universe.”

She then takes it back to the time he wrote Osama and now how he dedicated it to their daughter, Nefertiti when they had found out about her condition with Autism.

“I remember you were writing and producing Osama and were on a fast at the time, you kept telling me that you felt so connected to the spiritual world and wanted that to reflect in your new music.

“Our daughter who was a huge inspiration for the song had just received her diagnosis for being autistic during that time, you were so happy and mentioned you always knew she was special and smart. I have learned from you that success is happiness, peace, and contentment and not tangible things.”

Nandi said Zakes inspires her because of how he is so spiritually connected to the universe, “Being spiritually rich is the most rewarding form of wealth for you and that is why I love you! God continues to bless you and your beautiful, selfless heart. To a Musical Genius and my husband happy birthday Zakhele Madida,” she gushed.

Nandi has always been in Zakes’ corner and even defended him when he was accused of stealing Osama. Black Coffee said Zakes did not create Osama originally and that he should credit the people who did. “We all are doing our best to support each other and they don’t have a voice to cry out when such happens and I unfortunately can’t keep quiet someone has to say something. This particular song isn’t even out yet it’s just been played by DJ’s exclusively and now it’s here.”

Nandi told Lasizwe on his YouTube show ‘Drink or Tell the Truth’ that Osama is very original, “Of course it’s an original… the song is actually a reflection of where everyone should be. We should all be positive, we should all be happy for one another – especially as black people we cannot afford to divide and rule,” she replied.

“My sister is a psychiatrist and I hate to be so deep on a show like this but I think it is important for people watching. A lot of us have childhood traumas and really need to review and seek help and therapies… I’m saying all of us,” she said.

In other news – Mohale ‘no longer alive’ to Somizi

Somizi Mhlongo said his “last” words to his estranged husband Mohale Motaung, after packing his clothes on an episode of his reality series which aired on Showmax today (25 May). 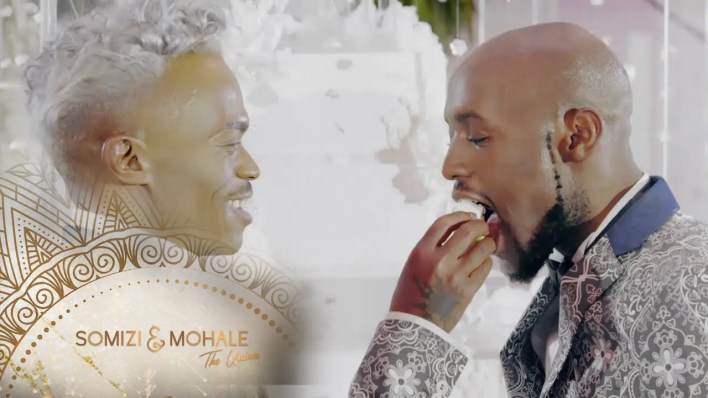 Somizi Mhlongo was seen packing up all his estranged husband‘s clothes in episode four of his reality series. He was emotional because the clothing reminded him of certain memories he shared with Mohale. learn more