Radio presenter Mohale Motaung has been the target of a lot of social media bullying, especially since his relationship with his estranged husband Somizi Mhlongo failed. His sister came forth to defend her brother, but she, too, has been dragged mercilessly for her remarks.

According to a local publication, Chef Palesa Kwanaite, Mohale’s sister, recently decided that she was done with Twitter trolls constantly bullying her brother, and chose to go at them head on. She went on her Instagram to slam those who have been dragging Mohale, whom she assumes to be Somizi’s fans.

In a now-deleted Instagram post, she wrote “I’m so bloody tired of these Twitter motherf***ers always being on Mohale’s case. Somizi, tell your stupid fans that my brother never wanted a cent from you. They are always talking k*k and I won’t be quiet.”

The post did not go well for Palesa, though, as Somizi’s fans, and Mzansi social media users, did not take kindly to the insults. As the story went out, she has been lumped in with her brother as “attention seekers” and “gold diggers”. They have reminded her that her brother did not carry designer bags or wear designer clothing before Somizi, so she better come correct.

Tweeps want to know why she would speak up now. They believe that as a family, they are all still trying to get Somizi’s attention, since they keep bringing him up while he just lives his life. They are also warning her against their retaliation, saying she should not run away crying when they respond after she called them all stupid.

In other news – I can’t control Mampintsha to not look at me – Makhadzi fumes at Babes Wodumo; reveals what really happened in the studio

Gqom artist Bongekile “Babes Wodumo” Simelane is trending once again. This time around, she is accusing fellow artist Makhadzi of sleeping with her husband, Mandla “Mampintsha” Maphumulo. 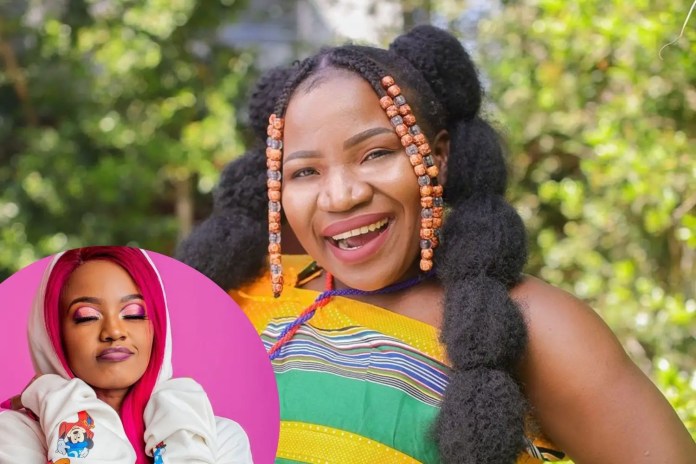 In a video clip, Babes can be heard swearing at and insulting Makhadzi. “I’m going to beat you up because you’re taking me for granted. Do you hear me? You’re supposed to be my friend, learn more