Babes Wodumo has been trending on social media for all the wrong reasons. She is seen ranting and raving, and is alleged to be beating her husband Mampintsha.

People are claiming she has an alcohol and drug problem and are begging her to get help!

Some people are sayings she might end up dying like Whitney Houston and are asking her family to do something before things take a bad turn.

Two weeks ago she went on Instagram and swore at her mamazala, Gugu Gumede, promising to give her hot klaps.

This Monday 27 December, she accused fellow singer, Makhadzi Muimbi, of sleeping with her kwaito star husband, Mampintsha. “I’m going to beat you up because you’re taking me for granted. You’re supposed to be my friend, yet you are sleeping with Mampintsha, as fat as he is? Stupid girl with no future. I’ll beat you until you call the police,” she said. Babes and Mampintsha have a son together and got married in April. Their wedding was shown on their reality show, Uthando Lodumo.

Makhadzi has responded that Mampintsha’s 4-5 wouldn’t satisfy her.

The Matorikisi singer later released a video directed at Babes. “You have problems with your man and you were beating him in front of us,” she said. Two different sources alleged Mampintsha was being abused by Babes. One of their clients said they had booked Mampintsha to perform at their event but on the way there Mampintsha and Babes started fighting. “Babes Wodumo started beating Mampintsha. She eventually jumped out of the taxi. Because of that fight, they never made it to the next gig,” said the client.

Another source said Mampintsha seemed powerless and fearful of his wife. “I’m afraid one day it’ll be fatal,” said the source. The abuse claims were initially raised by Mampintsha’s sister, Pinki Gumede earlier this month. She said they were scared one day Mampintsha would die and no one would take responsibility. She told Daily Sun it was an open secret Babes physically abuses her brother.

“But it’s difficult to act. Mampintsha loves Babes,” she said.

“Often we’ve had to drive from KwaMashu to Westville to rescue Mampintsha,” said Pinki.

“Their relationship is destructive. It’s kind of like Whitney and Bobby Brown mess that can only end in tears. She’s alcoholic and probably on drugs. I hope her parents will stand up and get her help,” she wrote.

Twitter user, CrocSclothing wrote: “Each time I see Babes Wodumo trending my heart breaks. She needs professional help. This is no longer normal.”

Brown Skin Girl wrote: “I am worried that Babes Wodumo will suffer the same fate as Whitney Houston.”

The publication tried to get comment from Babes and her sisters Nondumiso Simelane but their phones were off.

In other news – I can’t control Mampintsha to not look at me – Makhadzi fumes at Babes Wodumo; reveals what really happened in the studio

Gqom artist Bongekile “Babes Wodumo” Simelane is trending once again. This time around, she is accusing fellow artist Makhadzi of sleeping with her husband, Mandla “Mampintsha” Maphumulo. 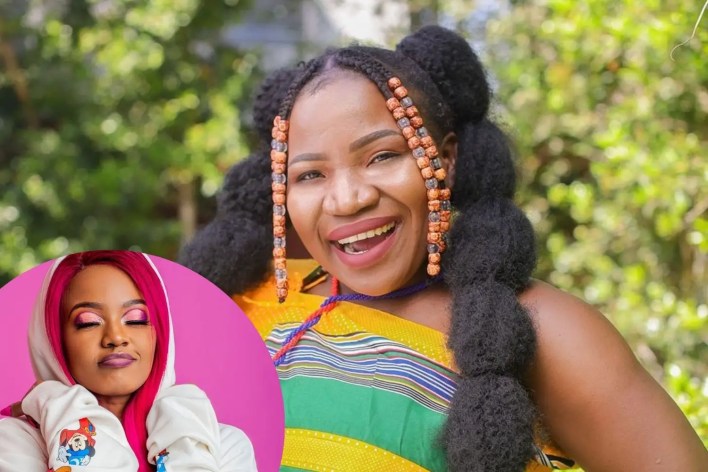 In a video clip, Babes can be heard swearing at and insulting Makhadzi. “I’m going to beat you up because you’re taking me for granted. Do you hear me? You’re supposed to be my friend, Learn More

Mzansi react to photo of Boity and Anton Jeftha k!ssing